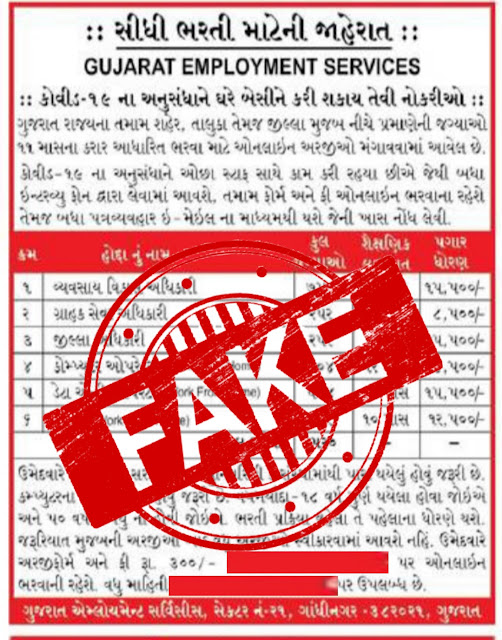 The advertisement, issued in the name of one “Gujarat Employment Services”, invited applications from interested candidates for posts such as Business Development Officer, Customer Service Officer, District Officer, Computer Operator, Data Entry Operator, and Writer, on the contractual arrangement and work from home. The advertisement offered a monthly salary of Rs. 8,500 to Rs, 25,500. It asked the applicants to make an online payment of Rs. 300 for the application.
According to Labour and Employment department,  no department of Gujarat government or any government agency has invited applications for any of these posts. The name ‘Gujarat Employment Services’ and nomenclature of the posts are clearly aimed at trapping unsuspecting applicants.  We have initiated legal action against this so-called recruitment agency, but we also appeal to people not to believe such fraudulent ads and fall prey to the scamsters.
Directorate of Employment and Training, which functions under the Labour and Employment department, is in the process of registering a police complaint against the said agency and the people involved.
Kishore Bhalodiaya, additional director training briefed that “We request people who may have already fallen prey to the fraudsters to contact the nearest police station”.
The Labour and Employment Department and the Cyber Crime Police Station of Bhavnagar Range also posted the fake ad on their social media handles and warned people against the job frauds.
Beware: Public attention is drawn towards an advertisement issued by one "Gujarat Employment Services" in newspapers offering direct employment in the government of Gujarat on the contractual arrangement and work for home. We wish to clarify that "Gujarat Employment Services" is a fraudulent company and no government department or agency is inviting job applications for such posts as mentioned in the above ad. The public is warned not to believe such fraudulent ads and fall prey to the scamsters. The public is also requested to approach the nearest police station in case they have been defrauding. We have already initiated legal proceedings against the said firm.

Important: Please always Check and Confirm the above details with the official website and Advertisement / Notification.